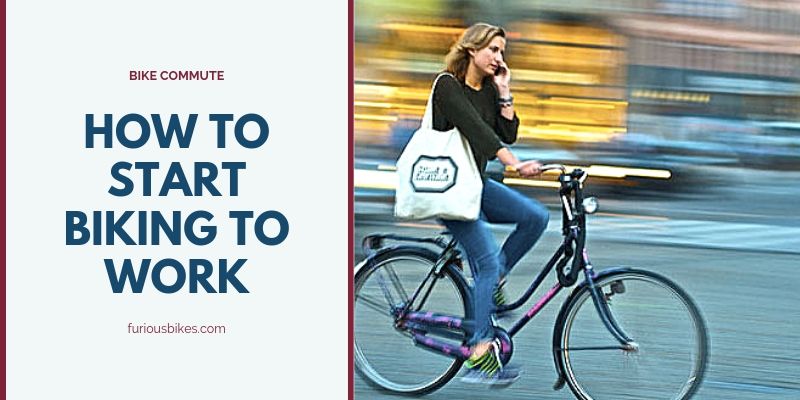 Last year I began to ride my bicycle to work. I loved it. I loved it so much that I’m still doing it a year later, even though my place of employment is now twice as far from my home as it was when I started.

Getting on that bike

There’s a bicycle in your garage. It’s dusty. Its tires are flat. You haven’t ridden it since your SO gave it to you three summers ago. You keep telling yourself that you really have to get that bike out, but you never quite do it. Right? Or close enough?

Why not ride it to work?

You don’t have to be a tree-hugging car-hating eco-nut like me to ride your bike to work. (And if you are, you probably already do.) All you need to be is somebody who wants to exercise, save money, save gas, de-stress, and have fun. Riding your bike to work is a great way to make two aerobic workouts part of your daily routine.

If you’re like me, you probably have a big list of excuses for not getting off your butt. Watch out for the next section…

I live too far away!

Try riding to work once on the weekend, just to see how far it is and how long it might take you. You might learn that it’s less work than you thought.

I live about 10 miles away from my workplace. It takes me about 50 minutes to get to work (less if the traffic lights cooperate). I thought at first that I would never be able to ride 20 miles a day.

Yeah, it’s a noticeable time commitment. But I try to look at it this way: Every hour I spend biking to work is an hour that I don’t have to spend doing aerobic exercise at the gym. It’s an hour spent outside in the fresh air and sunshine. I’ve got a killer tan, layered on slowly through the weeks. And I owe it all to my bicycle commute.

I’m out of shape!

You’ll get in shape really fast. And while you’re getting in shape, there’s no reason you can’t take it slow. Or stop a few times to catch your breath. Or walk the bike up that tough hill. You’ll eventually be riding up. Really.

Cycling is easier on us out-of-shape people than many aerobic sports. It’s not a load-bearing exercise; that is, some of your weight is on your butt. You’re not standing the whole time. Cycling is also low-impact, unlike exercises like jogging. Cycling doesn’t stress your knees. Instead, it’s good for them!

Even though my route is entirely flat, I was also nervous about whether I was too flabby to do it. I spent a couple of months improving my aerobic fitness on a stationary bike in a gym before I ventured onto the real thing. You might want to do the same to work up your confidence.

Yep, you probably will. So wear a t-shirt and carry a change of clothes. Your workplace might even have showers! Mine does. I leave a gym bag with a towel and soap in a locker and bring it home to launder once a week. If carrying extra clothes is a pain, try stashing a week’s worth in your office on Monday. Carry them home to be laundered on Friday.

To avoid getting hot, take some extra time and bike slowly. Or ride in early, before the day has had time to heat up.

What do you get out of it? Plenty.

Here’s what I’ve learned in a year of bicycle commuting:

Spiffing up your bike

You don’t need to buy a special commuter bike. The bike that’s sitting dusty in your garage is probably just fine. You can ride to work on it as soon as you pump up the tires. But for a quality commuting experience– and a safer commuting experience– you might want to take it to a bike shop for a tune-up.

You could even give it a tune-up yourself, with the help of one of the fine bike repair books listed below.

If you do want or need a new bike, you have a lot of choices. Many people prefer hybrid “city” bikes or mountain bikes for commuting. These bikes have flat handlebars, which let you sit upright when you’re riding. They also have fat tires, which give you a cushier ride.

Fat tires do have more rolling resistance, though, so they’re less efficient than skinny road bike tires. For a light zippy ride, you might want a road bike. Test ride bikes of each kind and see which you like best. (I commute on a mountain bike with skinny tires. For weekend fun off-road, I switch to knobby tires.)

Whatever kind of bike you ride, you’ll want to customize it a bit for commuting. Here are some gadgets you probably need:

Here are some things you don’t need that you might enjoy anyway:

The roads you drive to work on aren’t necessarily the roads you want to bike on. Spend a little time looking at a map and thinking about the best way to get from your home to your workplace.

If you’re in luck, there’ll be a road with a bike lane going in your direction. Failing that, look for a road with wide shoulders. If you have a choice, go for the less-travelled road, or the road with the better intersections. (Intersections tend to be dangerous.)

If your area is extra nice to cyclists, you might be able to ride a pleasant bike path. I once regularly rode a bike path from my home to my college campus. This path was great because it took me most of the distance and didn’t force me to interact with cars. And since it was parallel to a pedestrian walkway, I didn’t have to worry about watching out for walkers! Bike paths do have one danger spot, though: be extra careful at intersections. Drivers might not be expecting or looking for you on the bike path.

Motorcyclists and bicyclists have a name for car drivers. They call ’em Brain Dead Cagers. You’ll soon learn why, and you’ll wonder if you were as awful before you started biking to work. These tips will help you avoid accidents and manage the risk of sharing the road with lunatics.

Obey traffic laws the way you would in your car. Signal your turns. Ride on the right.

Act as if car drivers can’t see you. It isn’t so far from the truth: car drivers will see bicycles, dismiss them as unthreatening, and forget about them.

This is a variant on the general theme of riding defensively.

Pretend they’re out to get you.

Some drivers are total nutcases. Don’t bait them. Just get out of their way. Write down their license numbers and report them to the local police. Live to ride another day.

Here’s the order of terror on the road:

Notice that skaters and pedestrians fall below you. Be courteous to them. Warn them when you’re about to pass them. (You can ring a bell, if your bike has one, or say, “I’m passing on your left!”) Be especially careful if you’re on a recreational path shared with pedestrians. Don’t terrorize them the way cars terrorize you. And while you’re at it, be nice to the car drivers who are pleasant. Give ’em a friendly wave of thanks.

You have a right to be on the road. But sometimes staying alive is smarter than exercising your rights.

This document won’t be enough for you. You’re bound to have tons of questions about fixing your bike, about equipment, and about where to ride. So here are some resources I’ve found useful.

I have two kinds of bicycle book: the moral support kind and the repair kind. I’ve listed here my favorite books of both kinds.

Books that give you moral support:

Books that tell you about bike repair:

The Richards pair has also written a glossy coffee-table book about bicycles in general. It’s got lots of neat pictures of bikes through history, and is a good glossary of information about bicycling terms.

There are a few bicycling magazines out there. Most are of the adolescent mountain bike racing variety. Bicycling (also known as Buy-cycling) magazine is okay, but more useful to people who train “seriously” for 100 mile rides than for us utilitarian cyclists. Mountain Bike magazine has a fun attitude, but again, it’s aimed at off-road riders more than us commuters.