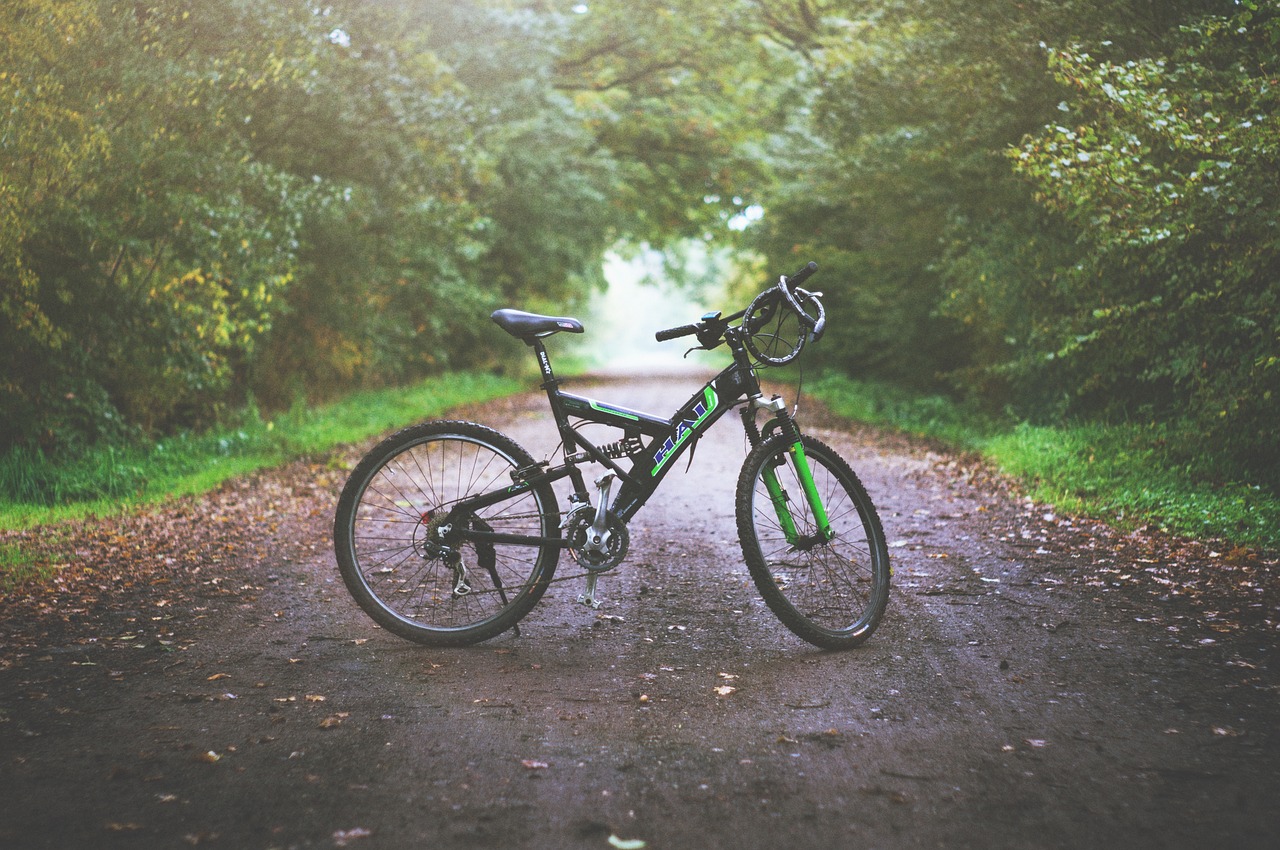 Because the “Mountain Bike” is as popular in the flatlands as it is in the mountains, little wonder it is also called “All Terrain Bike” (ATB) and “Off Road Bike.” Let’s visit its origins.

Exactly what, if anything, was done to those early “Mountain bikes,” to make them work on the mountainous hillsides is not known to me at this writing. It’s safe to assume that something was modified. It’s also safe to assume that whatever the modification was, it was kept among the moonshining in-crowd.

That having been said, I’ll turn the focus Westward, and to those young men and women who weren’t afraid to both ride in the daylight, and share their back-yard engineering with anyone who would listen.

The commercial Mountain Bike evolution didn’t start until 1974 and its first production bikes didn’t appear in stores until about 10 years later. In other words, it’s a relatively new machine and sport. Not surprisingly, California commercialized, if not started it all. There, a band of reckless young men started racing down the root-strewn trails of the Northern California mountains atop home-made bicycles. They rode balloon-tired, coaster-braked, spring-seated bikes with motorcycle brake levers and old 10-speed thumb-shifters. Gary Fisher was one of those bike-makers and has become somewhat the commercial “Father” of Mountain Bikes for his early efforts.

Four years later, in 1978, Gary rode his original bike down Repack Hill in 4 minutes, 22 seconds. Gary survived and at this writing, his record still stands.Because those early bikes had inadequate low gear ratios, Gary and his fellow riders had to push their bikes back up the hill, like sleds, for another ride down.

While the Californians refined their downhill bicycles, a group of East Coast riders were building their own version of the Mountain Bike for the rocky wooded trails of New England. The most promising work being done by a young cyclist named Chris Chance.

His first bike design, dubbed the “Fat Chance,” was outfitted with fat tires, of course, but Chris also re-welded the frame incorporating some radical geometric changes he thought would help him stay in the saddle while negotiating the single-lane paths snaking up, over, down and around the rocks, stumps and streams in the New England woods. His design used shortened chainstays, (horizontal tubes holding the rear wheel) which placed the rider more squarely over the back tire where climbing traction was needed. He used steeper head angles (the angle of the front fork) for quicker steering response. The result was a compact, responsive bicycle made for the woods. He didn’t stop there. Chance raised the bottom bracket which holds the crank/bearing assembly to give his bikes more ground clearance for rocks and stumps and he added a third front chainring for more low climbing gears.

Heck, it was bound to happen. In the summer of 1983, Chris Chance and Gary Fisher met at a closed-for-the-summer Ski Resort in Crested Butte, Montana and a year later, in 1984, the Mountain Bike as we know it was being delivered to bike stores. A new sport had arrived. There were undoubtedly scores of other design contributors whose names, rightly or wrongly, have been overshadowed by the fame of Chance and Fisher. I acknowledge and salute them too. Forgive me, this is the Readers Digest version.

Mountain Biking in the 1990s

The first mass-produced mountain bike was the specialized Stumpjumper in 1980 and throughout the 1980’s the development of mountain bikes was rapid.

Major savings in weight were achieved by using new Japanese aluminium rims and properly deigned thin-walled knobbly-tread tyres. These developments brought the weight of the best mountain bikes to below 30lbs.

Mountain biking had now spread world wide and became extremely popular in Europe where mountain bike sales far exceeded that of any other type of bike. The majority of mountain bike frames were being produced in the far East, and Shimano became the main producer of the components. They made massive developments in gear shifting mechanisms and braking systems.

Many of the top end developments continued to filter through to the cheaper bike. Other developments included clipless pedals, which replaced toe clips, in which the pedal clipped to the soles of shoes in a similar way to ski cleats. Another major development was the introduction of motocross, and this inspired front suspension forks which made bikes ever quicker.

Mountain Bikes by the 1990s

By the 1990’s mountain bike development had spread to the rear of the bikes with the introduction of rear suspension which made riding over rough terrain faster and more comfortable.

Bikes were now much faster but the brakes were clearly lacking in power. V-brakes and hydraulic rim brakes were better but were eclipsed by the far superior English developed disc brakes. These were better because they offered superior power and a better feel to the rider. Also, because they were in the middle of the wheel, they did not get affected by mud and other debris on the trail.

Downhill mountain bike racing is a time trial event that has many similarities to downhill skiing. Riders start their runs at intervals that can vary from 30 seconds to up to three minutes, depending on the level of the competition.

The bikes used in downhill tend to be heavier and much stronger than cross-country bikes, and almost always feature long travel dual-suspension (usually around 6-8 inches) whereas cross-country bikes are generally hardtails (4-5 inches of travel at the front).

Downhill mountain bikes have powerful disc brakes, which is mainly to allow the rider to only use one finger for braking, so that the rest of the hand can be on the bar and the rider can have better control.

The bikes also tend to have a single ring, as opposed to triple ring, because a large range of gears simply isn’t necessary. The single ring will also have a chain device to prevent the chain from derailing.

Safety Factors For Downhill Mountain Bike Racing
Downhill riders almost always wear a full-face helmet and often wear full-body armour. This is because the speeds achieved on downhill tracks is high and you are riding in close proximity to trees and rocks etc.

Downhill is regarded to be the ‘Formula 1’ of the sport of mountain biking because the technology is more advanced than any other part of the sport and it is the riders skill that is tested rather than the riders fitness or endurance.

IS IT THE BIKE OR THE RIDE?

For some, Mountain Biking’s principal pleasure is a love affair with the machine itself. For others, the machine is merely the means to a different end: getting deeper into the woods and further from the routine drudgery called responsibility and its oft-associated predictable boredom.

It can be both too, with magazines to suit both tastes. Mountain Bike, Mountain Bike Action and Mountain Biking all have the machine as a primary focus, whereas Bike highlights the experience of the ride. Bicycling is principally a road-bike magazine with an almost reluctantly patronizing Mountain Bike mention of some kind each issue along with heavy doses of Health & Fitness articles and related ads.

Telling the difference between a Mountain Bike and a Road Bike is easy. The Road bike has droopy handlebars and skinny tires. Mountain bikes don’t. Simple enough.

It had been over 20 years since I had ridden any kind of current- model bicycle and the advances in everything mechanical were astounding. I bought the first I saw that was in my price range. I loved the color and the bike looked just great. It rode and stopped good, shifted smoothly and had a front shock absorber instead of a fork. The bike almost pedaled itself. Sadly, I bought the wrong bike.

Now this isn’t a bicycle review and I’m not going to slam the manufacturer and model by telling you which bike it was–that’s not important. The lesson learned is this: had I not been so blasted curious I might still be peddling that first bike as happy as a clam. So be warned that what you are about to read may infect you with a lust to upgrade some components at best, or your whole bike at worst. Skip this section if you’re one of those people who doesn’t know when to put the brakes on the charge card.

Okay, you asked for it. Use your present bike or your imagination, and let’s go exploring. Of course, each of the components we’re studying is already part of an assembled bike. Building custom bikes is too expensive an ordeal for plain folks. Let’s start with the frame.